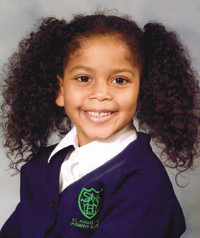 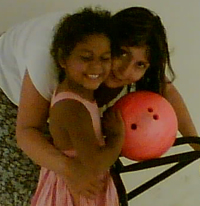 Eden was tragically killed in 2006 when a wall of fire stunt went wrong at the five star Gemini resort in Turkey. She was just six years old.

Elli Galvani, Eden’s mum:
“Eden was born on July 19, 2000 at 8.15 in the evening. She weighed 8lbs 5oz and Craig David was playing on the radio. Eden’s eyes were wide open and that day our lives changed forever.

As a baby, no one could have asked for a better behaved, more beautiful child.

During the first few years of her life Eden suffered from infantile spasms, a hugely worrying time for us. This serious condition could have seriously damaged Eden’s health permanently or at the very least left her with learning difficulties. However, despite the adversity, at the age of two Eden recovered with no lasting damage and was totally cured. She continued to develop to ‘above average’ level and the consultant doctor’s words were, ‘It’s a miracle’.

That word best portrayed our daughter. She was a little miracle. She was old and wise beyond her years – almost like she had been here before. Her thoughtful persona was always evident. In fact, teachers reported to us that at times new pupils were put into Eden’s capable, caring hands to ease them into their new environment. She was often described by teachers as eager to please and do her best at everything. One of the teaching assistants at her school also commented on how he always found Eden polite and charming, he said she was an example to all the other children. Eden was very popular and loved by her classmates and although she thoroughly enjoyed going to school, she always said it wasn’t fair as children were away from their mummies for too long.

Eden loved reading, storytelling, gymnastics, swimming, cycling with her mum and riding her scooter with her dad. She also loved music, singing and entertaining to any available audience. Eden had a passion for dancing, a skill inherited from her mum. When she was three years of age she went to a ‘Fun Song Factory’ concert and literally stole the show when she was invited to dance on stage.

Eden had an elder sister and brother who very much adored her. Eden hated to shop and on one occasion at the age of four she was not pleased about having to go shopping with her sister. She told her sister that if she ‘did not have to go shopping she would be really, really good’.

Her sister didn’t agree and told Eden that good behaviour was not something to be bartered. Eden responded by asking what bartered meant and when it was explained, she thought for a while and replied ‘is that like when I ask you if I can do something and you ask me for a kiss first’. Her insight was boundless.

Eden’s beauty and lovely character always astounded everyone she came into contact with. Always on a serious mission to ensure the happiness of her mum and dad. A greater diplomat the United Nations could not better.Eden packed a lot into her short life. She had a social diary that would be on a par with a socialite, she travelled extensively and loved people in a way that only a good heart can.

As parents, we had the joy of looking forward to seeing our beautiful girl grow up to become a responsible member of society, fall in love and get married. All of this sadly we will not now see happen.

They say you never know what you’ve got till it’s gone. As parents, we knew what we had from the first moment Eden widely opened her eyes on July 19, 2000.

We know God will take care of her and that in the school in heaven where all the angels learn to fly, Eden’s determination to do her very best will make her one of the best angels ever.”
See Eden’s tribute at www.gonetoosoon.co.uk