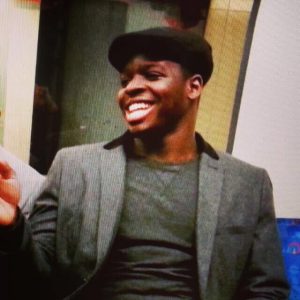 On 30th September 2014, my hero, my son, Denis Leramo was walking along this bridge and on this very day, on his way from his University he collapsed and died. “The Place” will forever be an endearing spot and remain a symbol of thoughtful moments and an everlasting memory for all of us.

Denis was only 19 years old and had already achieved so much in his life. He was an ardent and spectacular basketball player who devoted his time to playing amazing basketball at a very high level and coaching school children most days after school.

He won several medals and a couple of MVP (Most Valuable Player) awards for basketball and always remained humble all the times. Denis was the kindest, most generous and respectful young man and I had the honour and privilege of bringing him into this world. I am so proud of him. He may be physically gone but he remains in my heart forever and the hearts of his brother Victor, his dad Charles and all those who loved him.

Denis was a happy go lucky lad who never saw the bad in anyone. He was the best at getting people together and all his friends can attest to that. According to testimonies of most people, he touched lives one way or another and has left a huge legacy behind. In his spare time, he loved listening to music and rapping. His favourite rapper and rapping idol was Skepta. His passion was basketball and his favourite player was Dwight Howard (D12). He had hoped to have met both of them.

The cause of Denis’ death was SADS (sudden adult death syndrome) which is very rare and needs more awareness. This is why I have teamed up with the SADS organization to embark on some fund raising to contribute towards doing more research and providing defibrillators for schools.